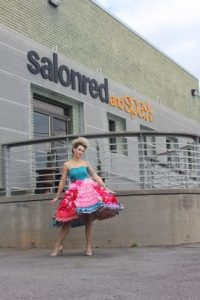 SalonRed Owner Jessica Soler: What Every Female Entrepreneur Should Know

Salon Red creator and owner Jessica Soler heads a mini empire with 100 employees who are spread out among five Atlanta locations—downtown Decatur, Candler Park, and Brookhaven (Candler Park and Brookhaven also have SalonRed Kids locations). Jessica started building the business 20 years ago because she couldn’t get a break as a 22-year-old with a felony record.

In fact, it was her record that launched Jessica, when she found herself standing before a judge who told her if she didn’t straighten out her life, she was going to end up in an orange jumpsuit permanently. The next day she enrolled in hair school.

“When I went to my first job interview, on the job application it asked me, ‘Have you ever been arrested for any crimes or felonies?’ and I actually [had] several, which is why I was in such trouble,” Jessica said. As she was filling out that part of the form, she had to draw an arrow and flip the page over.

“When I turned it in, they looked and they were basically like ‘pass.’ Even though I wasn’t that person anymore—that’s what people see sometimes,” Jessica recalled. “I thought ‘I’m just going to have to do this because no one is going to give me a chance.’”

So with $10,000 she’d saved from a job prior to getting in trouble, she opened her first Salon Red location without a computer, a front desk, or even styling stations—just some stools from Target and a few good friends.

“I had a fantasy that I would open a salon with my three best friends, and we would all work together and we would play with hair and make people happy, and we would all go home. That lasted about two weeks.” She quickly learned she had to be the boss, hired a financial advisor and a business coach, and proceeded from there.

Jessica has had plenty of challenges along the way, too. When she first began her expansion, she bought a salon in East Atlanta, a small neighborhood community that fit her brand. The former owner had six months left on her lease, and Jessica had initially planned to negotiate another lease—but the owner told her pointblank he would not because she was a woman. “He said it: ‘I don’t want another woman in there; I’m finally getting this woman out; none of my other businesses have women in there, and I’m not putting a woman in here.’ That was a huge eye-opener because I’d never worked in the corporate world,” Jessica said.

While the attitude may have surprised her, it didn’t stop her. She quickly found the downtown Decatur location and opened her second Salon Red, which is paired with a Salon Red Kids location next door. To date, Jessica says, 86 percent of her industry is made up of women, but there are no female CEOs, and very few women like herself who have created and franchised their own brand.

Full disclosure: I’ve been a Salon Red client for years (Big shout-out to Maurice!) and I have been physically and emotionally touched by the stylists there through many important life events–the deaths of both husbands, big interviews, meetings, travel, the birth of my first grandchild. And I always leave feeling uplifted, as much from what Maurice does to my hair as from spending time in a warm, caring community, where everyone knows your name and remembers your unfolding story.

Here are some of the things Jessica learned on her journey to success.

Be grateful for mistakes. “My mistakes are probably some of the biggest successes in my life—every mistake, I almost get kind of giddy and think, ‘Oh, I’m glad I screwed that up because now I actually know how to do it, and do it well.’”

Make a long-term plan. When Jessica started doing hair, she went to a financial advisor, who helped her define what she wanted—how many cars she would buy, how many vacations, how many kids she’d have. “That set me down the path of ‘What do I want my business to look like over the next 20 years?’ I decided every two years I was going to open another salon or business, and then after 10 years I would hopefully have five salons and then continue to grow.”

Get a business/life coach. Jessica works with business/life coach Wendy Watkins, has done so for 20 years, and says Wendy helps keep her on task. That help extends to every part of Jessica’s life, from managing 100 employees to her growth as a female business leader, and to balancing her hectic work schedule with being the mother of four children, 14, 12, 8, and 4. “What kept me with her was the accountability piece,” Jessica said. “There was no one to keep the owner accountable, and because it’s extremely lonely at the top; you have nobody else to understand or think things through—everybody just tells you what they want you to do, and that became such an issue.”

Engage your community. For women opening businesses, you have to have a huge presence in the community around you, for sure, because those are going to be the people who support you. You have to be secure when you go out to conferences or meetings; even if you’re intimidated, you have to hold your head up, and stand tall and proud, and be strong in your conviction and be passionate. If you make a mistake, admit it.

Community is also one of the biggest pieces of the Salon Red brand and culture, Jessica says. Trades between local businesses and her salons, for instance, are common, and Jessica lets her stylists trade with at least two people a year (Salon Red happily eats the cost). If people need a haircut but can’t afford one, they are never turned away. Employees spend a day every year giving haircuts and services to special-needs children and their teachers (often the first haircut these children get outside of their homes) and volunteering in homeless shelters.

Define your passion. Working with Wendy was, for Jessica, like an awakening of her soul, she says. “I’m basically here to serve, I’m here to give back, I’m here to help people reach their full potential.” Many people are physically touched only by family members, or their doctors, Jessica notes, and often your stylist touches you even more. “Physically it’s an intimate, emotional connection.”

She also notes that people share everything with their stylist, and that she shares more with her clients than anyone else. “Twenty years later, they’ve all seen me [about to] have babies and open all of my locations; I’ve seen them go through their journey. It’s like a continuation of a soap opera.” (Not to worry—stylists are the universal keepers of secrets!)

Accept people where they are. The salon industry, like other industries, has walkouts in which employees band together behind the owner’s back and leave to start their own business. Two years into her business, Jessica had that experience when eight employees walked out. “That was very challenging and slowed the growth of the process I had originally laid out with my financial advisor,” Jessica recalled. “I finally understood that  things happen, it’s not about me; they’re all about them … It doesn’t matter what anyone else wants to do, that’s not me, and I keep my eyes on the ball and I try not to lose focus.”

Lead by example. “You have to walk the walk, which is why I work so hard, because I lead by example and I would never expect anyone to do anything that I wouldn’t do myself. I still clean the toilets, I still build—I do everything that anyone in my company would do, plus more. And I think that’s important as women move forward.”

Balance work and family.  Jessica’s four children come from three separate dads: an ex-husband, an ex-boyfriend, and her current boyfriend. The dads handle all the school and outside activities, as well as the house, while Jessica serves as the breadwinner. Her biggest challenge, she said, has been her guilt over not being present for her children, given her demanding business hours and extended business trips.

Even that issue—being a better mom—Jessica is working with her coach, Wendy, to solve. When she started mothering, Jessica says, she rated herself a 2 on a scale of 1 to 10. Instead of trying to figure out how to get from 1 to 10, she took baby steps, trying to get from a 2 to a 3. Slowly she added things like family dinner two nights a week and alone time with mommy on Sundays (it alternates between children), and she got to a 4. And the balance continues to improve, she says.

Take time for yourself. It’s also important to keep some hours in your day to meditate, reflect, or “just be with me a minute,” Jessica said. To do that, she keeps what she calls “vampire” hours, meaning that when she gets home from work and once all of the household dies down around her, she makes time for herself between midnight and 3 a.m. “It’s the only thing that brings me peace.” In those quiet hours, she’s also free to work on new ideas, like dresses made from recycled materials or brightly-colored “yarn trees” that are part of the window display at SalonRed Kids in downtown Decatur (and she’s up again by 7:30 a.m.).

Reach out for support. “I freak out and I break down, and I don’t like my life a lot of the time because it’s so many people depending on you, but you just keep going,” Jessica said. “Even after you break down, you call the person who supports you [so they can] share their strength with you.”

Don’t take shit. “It’s going to come at you from every direction because you’re a woman, especially if you’re blond and petite. I am very underestimated and overlooked and have been for a long time, but all of a sudden, it’s flipping.”

What’s next for SalonRed: Rather than more locations, Jessica is now in the process of consolidating and extending hours to create flexibility for her clients and employees. The Decatur store closed September 10th, and hours and styling stations will expand in her Candler Park and Brookhaven locations. The end result will be “mega salons” where stylists can cycle through in shifts and customers can get service almost on demand.

She’s also working to expand her personal brand nationally as a business consultant and coach to help other women in her industry achieve success. Her message to women: “Keep fighting, keep driving, be smart, keep your numbers, be organized (even if you’re not, figure out a way to do it) … Get your orchestra and make sure you put them in the right chair so that you can make beautiful music together. Those people are gonna be what helps your company grow.”